Take back your crown (cont’d) 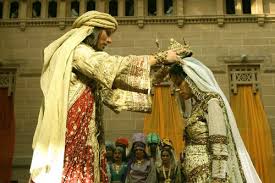 In the evening she went and in the morning she returned to the second house of the women to the custody of Shaashgaz, the king’s eunuch who kept the concubines. She would not go in to the king again unless the king delighted in her and called for her by name – Esther 2 : 14.

What pain the women that were selected went through, because I imagined myself in their position. They have voice but cannot be heard and in the midst of such tribulation the good part of it is that God who knows the heart of men is still in control to make His promises come to pass. God was aware of the suffering Esther and the rest of them are going to pass through because He knows the end from the beginning but He has already chosen to use Esther to set the Jews free.

We should always bear in mind that in every breakthrough, there is bound to be suffering and it is in the midst of such, God will strengthen your spiritual muscles so that when the blessing now comes, no demon will raise up its ugly and stubborn head against such blessing without you being able to fight for what is rightfully yours.

There was injustice despite the fact that the preparation seems to be for marriage but the painful part of it is the slavery concubines and who was not chosen will go throughout her life carrying such burden of abuse in her heart because when one is passing through pains, it  always easy to tell the victim ”try to overcome and forget about it” but there is no bush or waist bin where pains are being deposited but rather it will still remain in the mind. It is true that we cannot take over the pains of another, it is the victim who has to always bear such pain but the burden can be shared.

Father, You are a God that hear the cry of Your children. Help those that are being abuse and oppressed today in one way or the other. Let their cry be Your cry, let their tears be Your tears, let their sorrow be Your sorrow so that at the end Your glory will be manifest in their lives in the name of Jesus Christ.

Posted by osarobohenry on 12/02/2014 in Focus, GRACE OF GOD, victory and tagged Courage, Fear not, God's Grace, Trusting God.