The death of a prominent football coach

His name is Luis Aragonés. He was born on 28th July 1938 and died 1 February 2014. He spent the majority of his career as a player and coach at Athletico Madrid. He was a prominent player and then coach of the successful Athlético team of the late 1960s and early 1970s. The team won Spanish league four times, reached the final of the European cup and won the Intercontinental cup. Between 1964 and 1974 he played 265 La Liga games for Athlético and scored 123 goals. Aragonés coached the club on four separate occasions. He also played for several other clubs, including Real Madrid and played 11 times for Spain.  Apart from Athlético he also coached seven other La Liga clubs as well as the Spanish national football team whom he led to their second European Championship title in 2008. He became the head coach of the Turkish club Fenerbache after Euro 2008, the sole time that he coached outside of his native Spain. He died on 1 February 2014 aged 75. May your soul rest in peace. 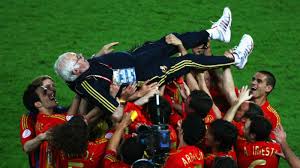 With the captain of the team.

During one of the training with the team.

When the cup was presented to the Spanish king, Juan Carlos.

Posted by osarobohenry on 01/02/2014 in Friendship, Love and tagged Integrity, Peace.